Another good week for global equities, but a poor one for global bonds. Of course, that hides some disparity in the subsections that make up both markets. In the broadest sense, the US Federal Reserve (Fed) said interest rates will have to be higher (which we read as “higher than the market’s expectations”) and US Treasury yields have risen rapidly as a result. That has driven down bond values due to the inverse relationship between yield and bond value movements. Equity investors, on the other hand, have been welcoming the de-escalation of energy price movements, to a greater extent than they feel concerned about the negative valuation impact higher yields also have on equity prices.

This type of market dynamic marks a bit of change. For much of this year, falling bond prices (and higher bond yields) have been associated with weaker equity markets due to the adverse valuation effect already mentioned. Indeed, the three-month rolling correlation between bond prices and equity prices recently became positive, which is a rare occurrence as the chart below shows (taking rolling three-month trading periods and observing how closely the daily moves align with each other). Here is the chart for US markets: 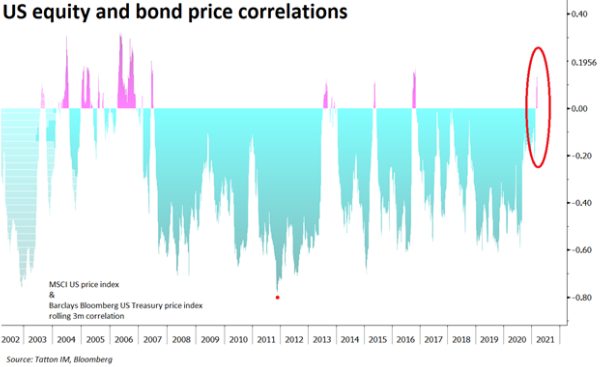 Not all bonds did badly this week. Corporate bonds have had a hard time in recent months, as both credit spreads (the yield premium for corporate debt versus government debt) and underlying yields have both risen. However, this week, credit spreads declined, in line with equity risk premia – in other words, equity valuations got a bit more expensive.

A decline in the pricing of risk perhaps goes hand-in-hand with the feeling that geopolitical risks on resource prices have lessened. We have observed before that the start of a major conflict has often marked the point where the associated risks are most priced into markets. Equity markets have tended to perform well in the months afterwards, even if the conflict continues.

In the case of Russia’s invasion of Ukraine, there are still several potential areas that could spell a   resurgence of risks. However, strong and concerted policy efforts to contain the conflict’s impacts on energy prices are bearing some fruit. This morning, European natural gas prices fell more than 10% following a deal between the US and the European Union (EU) to boost the supply of American liquefied natural gas (LNG).

The US has agreed to supply an extra 15 billion cubic meters of gas as LNG to European countries by the end of 2022. That still leaves a lot of shortfall to cover, with the EU seeking to replace 101.5 billion cubic meters of Russian gas this year, while hoping to ensure storage is filled to a 90% level by October. However, as this agreement is not about the details of shipment, it is not entirely clear whether the extra gas will indeed reach the EU. Under the agreement, EU member states will commit to purchasing 50 billion cubic meters of US LNG per year until at least 2030. This is a way to get the EU to look past its carbon emission targets for a longish period, and ensure US producers have the commitment required to invest in production. It neatly allows Biden some room to continue his own domestic green push, trying to move US demand to greener energy sources, while still having external demand which keeps the US fossil fuel industry alive (and the lobbyists off his back).

Holding back energy prices from another destabilising bout of price rises is extremely important for markets, given that, as of late, central banks are no longer treating these inflationary events as something they can look past, having grown concerned that the extended period of rising prices may once again embed inflation expectations.

But even if energy prices stay stable, it is not clear that central bank inflation-fighting work will be done. Where workers are plentiful, and wage hikes are minimal, the price shock may remain just that and interest rates could remain lowish. This seems to be the case in Asia. It may also be the case that the larger EU nations (including the UK) are not be seeing abnormal wage increases. However, the Fed is fretting that some labour market indicators (such as the Atlanta Fed Wage Tracker, which is now running at a 6% year-on-year level) continue to flash warnings. Job offers still look like they are outpacing the supply of labour.

Another aspect is that a new ‘era of national security’ may channel resources into less productive areas than has been the case since the fall of the Iron Curtain. That might mean inflation stays at a higher long-term level than markets have become used to. This may be more pronounced where defence spending has been lower – the EU has proportionally much more to spend and a greater willingness to do so now.

And, we are still not though the pandemic. Shanghai recorded a record of 1,609 cases today (Friday 25 March). Bloomberg reports that the backlog of goods in the major ports of Shenzhen and Hong Kong has risen to its highest level in five months. Rising infections in Shanghai, meanwhile, have spurred fears that measures to combat the virus could affect the transport of goods to and from the world’s biggest port.

Interestingly, China’s restrictions to contain the fast-spreading omicron variant have hit supply chains but have also hit fuel and other raw material consumption. Bloomberg reports that the many small independent Chinese oil refiners have reduced operating rates. While travel curbs have hindered the flow of raw materials, China has not yet reported output losses at major smelters, where production is usually protected by local governments to ensure security of supply, given their importance to regional economies. Last week, Goldman Sachs reduced its forecasts Brent crude prices and Chinese oil consumption in the second quarter as, for the moment, the constraints appear to be acting to keep prices stable.

Still, China’s imports and exports of commodities could also ultimately be at risk as ports become more congested because of the logistical disruptions caused by the lockdowns. There is also the likelihood of a similar sort of activity bounce-back seen elsewhere after lockdowns are brought to an end.

In this apparently mixed picture, there is perhaps a somewhat difficult consistency. If risks such as Covid or the Ukraine war continue, risk premia are likely to remain higher than usual. But if risks decline (and with them, the markets’ pricing of risk premia), central banks (and especially the Fed) will want to prevent the inflationary behaviour that is a consequence of raised inflation expectations from the rebounding demand hitting still restricted supply.

The good news is that during the past few months, equity markets have built up quite a lot of risk premia which can buffer the impact of rate rises. It remains to be seen how markets will react if rate expectations rise high enough to start to hurt the growth outlook. Or in other words, how long it will be until good news is once again at risk of turning into bad news for markets.