It has been a quiet week in equity markets. The world’s major stock indices mostly continued their recent holding pattern, awaiting news on where things will go from here. As we have written before, the global transition phase we find ourselves in – between a forced economic ice age and whatever comes next – makes it more challenging to know how to interpret the variety of signals on display. On the one hand, we have rapid vaccination programs, continually supportive policy and more liquidity flowing around than anyone knows what to do with. On the other hand, a surge in Delta variant cases, fears of an abrupt end to fiscal support and the hugely uncertain long-term economic effects of the virus are weighing down on sentiment.

This has led to a partial unwind of the ‘reflation trade’ that had boosted cyclical assets earlier in the year. It was why, in May, we decided to realise the profits from our (temporary) allocation to global small cap equities. As we discuss in a separate article today, risky assets are being repriced due to investors’ appetite for positive yields. As we go through the transition, this brings both opportunities and risks for investors.

In the shorter term, markets could do with some positive news then, which they can hopefully find from the corporate earnings reports trickling in. This week, US companies began unveiling their results for the second quarter of the year, with analysts expecting some phenomenal numbers. According to the consensus expectations, firms in the S&P 500 will reveal a 61% year-on-year increase in earnings, up from a 48% jump last quarter. This is driven by both an increase in sales growth – up to 22% year-on-year – as well as an expansion of profit margins to just over 11%.

Of course, these eye-watering growth figures are mostly driven by base effects. In Q2 2020, the world was in lockdown and the sharpest global recession on record, and earnings growth sunk severely into negative. The current results certainly show the strength and speed of the rebound – propelled by an impressive recovery in economic growth – but future earnings seasons will not be able to boast such impressive figures even if the recovery continues smoothly. 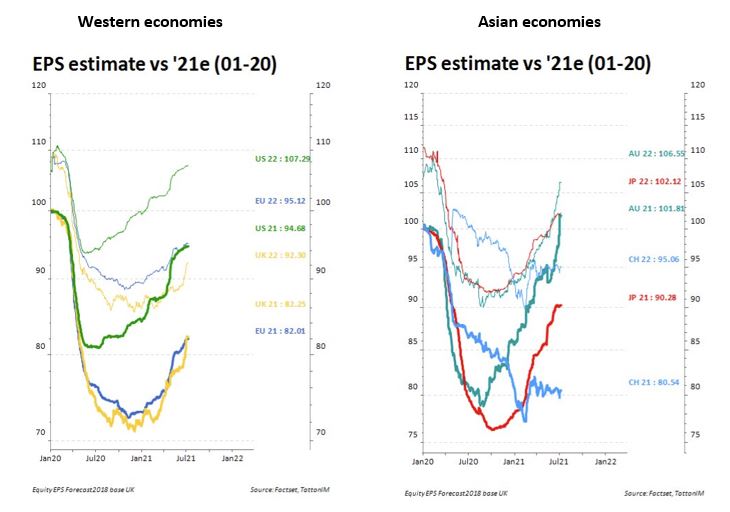 This can be seen in the breakdown of the results. While aggregate earnings have soared from last year’s depths, the median S&P stock is forecasted to expand earnings per share (EPS) by a more modest 24%. That is still a respectable figure, but it shows the dispersion in the results of American corporates. The same was also true during last year’s downturn, as aggregate EPS fell by 32% in Q2 2020 while the median figure was only down 12%.

The main drivers of these varied results are cyclical companies, who were most vulnerable to the downturn and most likely to do well through the recovery. Just like in the first three months of the year, the financial sector is playing a significant part in Q2’s earnings rebound. Forecasts put EPS growth for financial firms at 116%, making up 25% of the EPS growth for the entire S&P 500.

Not all of this outperformance was a purely cyclical story though. JPMorgan saw its profits soar from a combination of deal-making and a release of $3bn in reserves – even if overall revenues and loan activity were lacklustre. Analysts at Goldman Sachs estimate that reserve releases will boost banks’ EPS up 18% by the end of this year. Banks that engaged in more traditional lending activities have fared noticeably less well.

This is a result of shifting market sentiment over the quarter. Investors were excited about the so-called great reflation earlier this year, as rebounding activity and ample liquidity pushed inflation expectations substantially higher. That excitement has since pulled back, with markets now taking a more muted outlook.

US technology giants – the stock market’s big winners last year – have benefitted a lot from the recent mood swing. The S&P’s five largest stocks – Apple, Google, Microsoft, Amazon and Facebook – are actually expected to post less than their usual share of earnings growth. The mega-tech sector is expected to deliver 14% of the index level earnings in Q2, according to analysts, despite making up 22% of the index’s total market cap.

Their performance is nevertheless expected to be rather healthy, with average EPS growth of 52% in Q2 2021 (the companies will release earnings later this month). This is made all the more impressive when you consider that the tech giants were some of the few companies to actually grow their earnings through the pandemic – and so did not have the lower base level that others had. Their reliable and seemingly covid-proof revenue streams are what make the stocks so popular among investors, especially given the weakening of near-term growth sentiment. Whether it will stay that way will depend on the levels of regulatory scrutiny politicians will put them under. If western governments follow China’s recently very repressive lead then this would not bode well for the US tech giants.

Regardless, the earnings season should be a positive one, and is unlikely to do any harm to market sentiment. That will especially be the case if we see a raft of results that beat current expectations. We have written in the past that the so-called ‘surprise’ measures for EPS (measuring how much actual profit reports exceed or fall below forecasts) can be a bit of a game for companies, particularly in the US. Companies sometimes have a habit of forecasting lower growth figures only to beat them and get a subsequent boost to share prices. Nevertheless, positive surprises will likely go down very well in the current context, with plenty of cautiously optimistic investors looking for reasons to ditch their caution.

Caution could be a wise option, however. Earnings reports are by their very nature a picture of the past rather than a vision of the future. And with the recent surge in Delta cases all across the world, the last three months might be a bad indicator of what will happen now. The outlooks that firms report in the coming weeks will therefore be even more important than past profits. These self-predictions could be crucial as the world economy navigates another leg of the pandemic. We will have to watch them closely.