The UK received worrying economic news on multiple fronts this week, with several utility companies going under and the prospect of steep rises in winter heating costs, petrol stations running out of fuel, gaps on supermarket shelves and the Bank of England signalling it may raise rates as early as December of this year. Globally, the news flow was not much better, with economic data confirming slowing rates of growth and the imminent demise of China’s largest property developer causing journalists to cast their minds back to the Global Financial Crisis. If that was not disturbing enough, the US Federal Reserve (Fed) announced it will likely begin tapering its COVID-induced asset purchase programme before the end of the year, driving down future purchases to zero by the middle of 2022.

Against this unnerving backdrop in economic and central bank news flow, investors may have been surprised at how relatively unfazed stock prices (and capital markets more broadly) traded over the week. After falling sharply on Monday, stock markets recovered over the course of the week and have merely continued their skittish sideways to slightly down movement that we already observed last Friday. Almost more important for investment managers though, was the stability in bond markets. Given the excited talk of a looming global credit market meltdown, and then central bank policy error, there was precious little movement in neither credit spreads nor the yield curve.

While the lack of movement in credit spreads tells us there is little expectation that contagion will spread from Evergrande/China around the world, the marginal steepening of the yield curve in the US (see chart below) tells us that capital markets are in broad agreement with central bankers that monetary stimulus should and can be reduced from where we stand today without undermining the longer-term growth outlook. This can be seen as evidence that central banks are succeeding in signalling confidence in the sustainability of recovery, which is positive as it stabilises the set of expectations that guide planning of all actors in the economy. 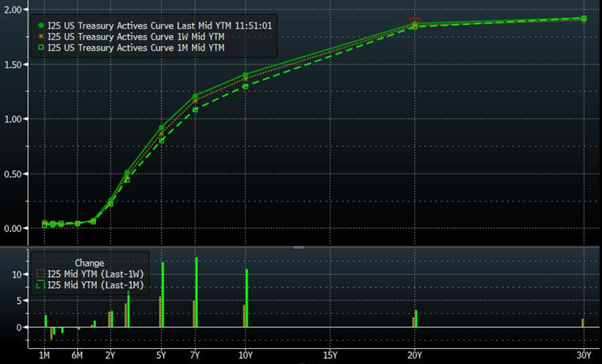 We cover the Evergrande story in detail in a separate article this week, which lays out the repercussions a default could have. The Chinese authorities are acting rationally if they let the company go under, despite the negative economic impact of a company of its size, as they are seeking to steer their economy onto a more diversified and stable economic growth path. However, their continued clampdown on the technology sector – further emphasised today by declaring handling all cryptocurrency as illegal – makes us wonder how this suppression of creativity aligns with their aim of increasing China’s domestic productivity (rather than export volumes) through a major innovation drive. Our belief that China will contribute little to incremental global growth this year and next has been further underpinned, but we note also that the Chinese authorities will continue to be forced to stimulate their economy, which should help to clear supply bottlenecks.
Returning to the unpleasant domestic news, the Bank of England has a reputation of talking hawkishly while acting dovishly. The fact it said it would continue its programme of extraordinary monetary easing – while at the same time tightening through an interest rate rise – has us wondering whether this is more of a warning shot towards the government. Given current upward price pressures are predominantly the result of labour shortages and regulatory failings in the energy sector, the government has the levers for remedial actions at its disposal.

Short-term pragmatism around work visas would go a long way in this respect, instead of dogmatically insisting on a longer-term solution of redeploying people to the workforce who have in the past not shown the required flexibility. Is another government u-turn in the offing?

Taking a further step back, much of the current stress in the economy and supply of goods and services stems from supply bottlenecks which in market economies are usually temporary, unless unsuitable regulatory frameworks of physical destruction make it hard for entrepreneurs and businesses to ‘follow the money’. In the current global environment – still disrupted by the pandemic – this may take a little longer. But given there was no physical destruction to productive resources, governments are at task to temporarily lower the regulatory hurdles that work well when flows of goods run smoothly, but now constitute obstacles.

Heeding the advice from experts to “fix the roof while the sun shines” and prepare for energy supply disruptions by maintaining more than seven days’ worth of natural gas reserves is another learning that politicians may want to take away from the exceptional price volatility that has driven the UK’s energy sector to the wall. We would suggest that a mismatch of regulatory framework versus physical market reality is what caused this week’s UK utility crunch, rather than a failing of markets. Those who remember the fall of Northern Rock at the dawn of the Global Financial Crisis may have already seen the parallels of being permitted to sell long-term fixed price contracts while being fully exposed to short-term price fluctuation (asset-liability mismatch), but without being required to hold the capital required to cover the losses should the ‘bet’ goes wrong.

Let us close this week’s reflections by turning to the next possible source of worries: Germany’s general election this Sunday, where voters will decide on a new leader for their country. Given the fragmentation of the political party spectrum in Germany (as in most of Northern Europe) replacing Angela Merkel after 16 years in office will not be a straightforward affair. Various coalition permutations will be possible and have already been discussed, but the consensus seems that there will not be another ‘grand coalition’ between the Christian Democratic Union (CDU) and Social Democratic Party (SDP) just right and left of the political centre. We can therefore expect concern next week about German politics becoming a destabilising rather than stabilising factor in Europe. However, if the last 70 years are anything to go by, regardless of what shape the coalition ultimately takes, this seems rather unlikely.